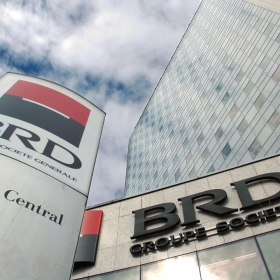 Societatea Nationala de Credit Industrial, the predecessor of BRD - Groupe Société Générale, was created in 1923, as a public institution, the State held 20% of the share capital, the National Bank of Romania 30%, the rest was held by individuals, among which a group of former managers of Marmorosch, Blank & Co., the first modern bank in Romania. The mission of that new institution was to finance the first stages of development of the Romanian industrial sector.

After the Second World War, according to the Nationalization Law of June 1948, the Societatea Nationala de Credit Industrial was nationalized, thus becoming Banca de Credit pentru Investitii. In 1958, after the reorganization of the financial system, Banca de Credit pentru Investitii obtained the monopoly in Romania for the medium and long term financing of all industrial sectors, except for agriculture and food industry. It received a new name, thus becoming Banca de Investitii. During that period, most of the financing extended by the World Bank were run through Banca de Investitii.

In 1990, the monopoly from which the specialized banks benefited in their field ended. Banca Romana pentru Dezvoltare was established as a commercial bank and took over the assets and liabilities of Banca de Investitii. The bank received a general operating permit.

In December 1998, an agreement was signed between Société Générale and Fondul Proprietatii de Stat (the authority that managed the state's holdings), through which Société Générale subscribed a 20% capital increase and purchased a stock that allowed it to own 51% of BRD's increased capital.

In 2001, BRD was listed on the Bucharest Stock Exchange, in the first category, becoming rapidly on of the most traded companies. In 2003, Banca Romana pentru Dezvoltare became BRD - Groupe Société Générale following a rebranding campaign. In 2004, Société Générale purchased the residual stock held by the Romanian State in the capital of BRD.

We would like to remind you that BRD - Groupe Societe Generale has not requested and will never ask any of your authentication data (user code, password or password token) or confidential information related to your card (card number, expiration date, security code or PIN) by phone, nor e-mail or SMS.

These confidential data will be used only for the internet banking authentication or for online payments.

At the same time, if you notice a different appearance of the usual MyBRD Net application (ex. A notification message that the page is unavailable and you are invited to log in again, or to sync your token device), please stop the authentication process immediately and contact as soon as possible through MyBRD Contact tel: 021 302 6161.

Always with you,
Your bank. Your team